August 20th 2013, 22:00 hours.  Four well-prepared students from Eindhoven University of Technology are ready to start the Athlon Real Long Distance Record with the Tesla Model S Performance with a 85 kWh battery. For a video report see at the end.

The objective of the record attempt is to show the possible range when only minor changes are made to the Tesla model S, while driving according to the legal speed limit, and with two passengers (driver+1). A follow car with the other two students was accompanying  the Tesla.

In preparation for  the record attempt, we made the following settings to the vehicle:

The current distance record with a Tesla Model S in the U.S. is 425.8 miles (681.28 km). However, during this drive, the average speed of the Tesla was 18 mph  (29 km/h). This is not a speed driven in daily use. Elon Musk (CEO of Tesla) provided us with a graph which illustrates the consumption at different constant velocities (left figure below).  As can be observed, the lowest consumption is around 20 mph (32 km/h), which is approximately 180 Wh/mile or 113 Wh/km. Our goal is to achieve an average speed of 45 km/h or 28 mph, to represent more realistic driving conditions. This means the minimum consumption will be around 190 Wh/mile or 119 Wh/km, according to the figure from Tesla, if we drive at a constant velocity. This would give us a theoretical range of almost 426 miles, or 682 km, assuming ideal conditions. As preparation, we used three working points to calculate the efficiency of the conversion from electric energy to mechanical energy to get a more accurate range predication. Additionally, we incorporated our expected driving velocities into the prediction. We calculated the efficiency of the conversion at 88%.  When we put this value in our calculation we obtained the range prediction in the figure on the right. The maximum distance we can achieve according to our calculations is 622 km with an average speed of 45 km/h. There are several reasons for the difference between our calculations and Tesla’s. First, Tesla assumes the battery is new and all 85 kWh can be used. Secondly, we do not know all the (internal) specifications of the Tesla Model S components.

Figure 1 Tesla at the Tripoint

The driving was much more intense than we expected. It took a lot of concentration to keep the velocity as constant as possible.  When acceleration was necessary, we accelerated as slowly and smoothly as possible. Also, when you realize you have 416 HP and 600 Nm available, it makes you feel dreadful when you do not use it all.

We really benefited by driving during the night as the lack of traffic really gave us the ability to drive as smoothly as possible without disturbing other drivers too much. During the first 50 km we used approximately 128 Wh/km. This is much higher than the theoretical consumption, but this didn’t take into account acceleration, different wind resistances and different road surfaces. Still, this would give us a range of approximately 632 km. After 4.5 hours of driving we arrived at the outskirts of Den Bosch, a good time for the first team change.

The next part of the trip was on a highway. We were curious about what this would do to our range. We decided to compromise on the velocity a bit and tried to extent our range as much as possible. Therefore, we drove on the highway at an average speed of approximately 80 km/h until IJsselstein. Here, we left the highway and we went on our way to Haarlem. We arrived there around 6 o‘clock in the morning for a much needed coffee break.

The strains of driving were really showing and we decided to make more regular stops to change drivers and to get a bit of fresh air. After our coffee break it seemed  the rest of the Netherlands was also awake and the traffic on the roads was getting much heavier. We had to increase our driving speed to 65 km/h to not disturb the other drivers on the road too much and keep it safe.

From Haarlem we continued our journey into the “Polder” to a small town called Langereis, which in Dutch means “Long Journey.”  When we arrived we had almost driven 330 km.

We continued our journey to one of the greatest engineering achievements of the 1930’s in the Netherlands, the Afsluitdijk. This was the longest stretch of highway on our journey. We had to drive about 40 km before we could leave the highway at Bolsward.

Figure 3 Tesla on the ‘Afsluitdijk’

Another thing that we didn’t expect were the speed limits of 100 km/h on some regional roads. When we did the preparation the roads had the characteristics of a normal 80 km/h road. As you might expect, the higher driving speed decreased our predicted range significantly. By now we had driven 440 km and the predicted range dropped under 150 km, this meant we were not going to pass the 600 km mark. A new strategy was necessary. We stopped to look at our options and  decided to take smaller roads with less traffic. This meant we could drive at a more constant speed, which was beneficial to our range. We arrived at the city Urk, which was an island in the Zuiderzee until 1939. After a quick stop at town hall to take a picture, we made the last part of our journey into Flevoland.

The small roads in Flevoland gave us the chance to drive at a lower speed to extend the range above the 600 km limit again. After some rounds in Flevoland, we arrived at the Athlon headquarters with only 12 km left according to the onboard computer. We started driving circles around the Athlon headquarters, so that when the battery died we would not have to push the car too far to the nearest charging point. The onboard computer showed that our predicted range was 4 km, this meant we were nearing the end of our journey and we still hadn’t passed the 600 km mark. Everybody was getting more excited and worried, would we pass 600 km? Frank was driving the car and Kevin, who was there with him, was keeping us up to date. Everybody outside was very excited when we received word that we had passed the 600 km mark. Now everybody was asking the question, when will the car stop? Frank and Kevin kept on driving and driving and driving. It seemed that our Tesla didn’t want to stop, only after driving -23 km on the range predictor did it finally come crawling to its end. Our Tesla had driven 625.5 km on one single charge.  For this distance it used 79.8 kWh, which means 127.6 Wh/km on average. After popping the champagne and shaking hands, and of course pushing the Tesla to its charging point, we packed our stuff and drove back home to get some well-deserved rest. 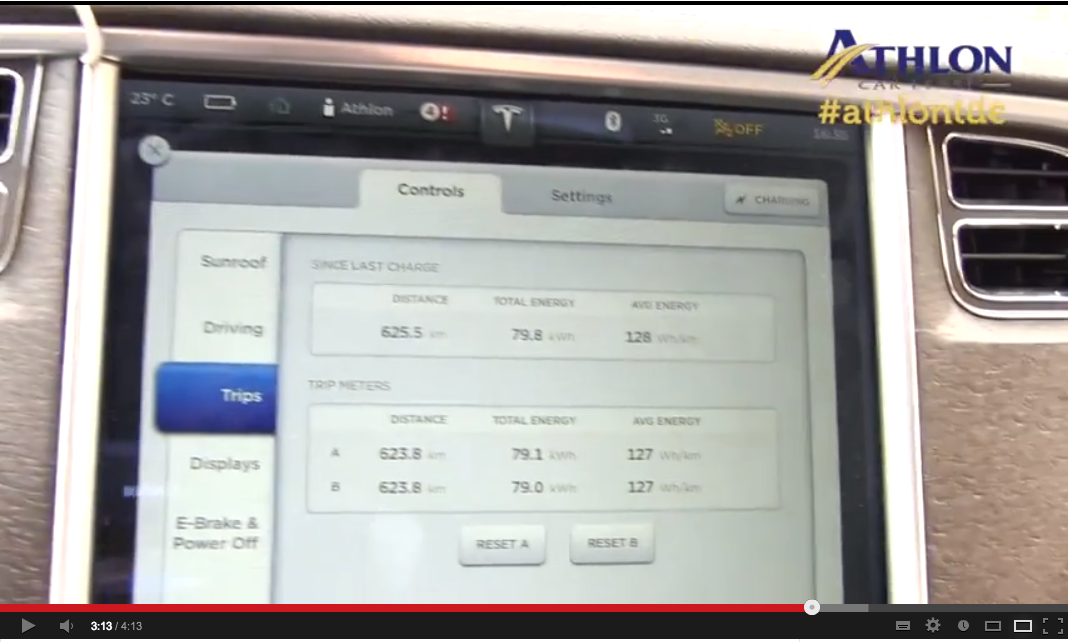 We were all exhausted, but we were really happy we had done it! We had put down the first European Record for long distance driving with an EV, and for us it also was a world record on normal roads!

We would like to thank Athlon Car Lease and Prof.dr.ir. Maarten Steinbuch for giving us this incredible experience. We hope we can contribute a little bit to electrifying the Dutch car fleet.